The Regional Municipality of Wood Buffalo (“RMWB”) and TOK Transit Alberta Limited (“TOK”) are pleased to jointly announce an amicable resolution of their legal proceedings that had been brought in the Alberta Court of Queen’s Bench.

The litigation between TOK and RMWB arose out of the manner in which the Transit Services Agreement was terminated. The legal proceedings have now been resolved and discontinued on a consensual basis by agreement of the parties.

In the fall of 2012, RMWB undertook a search for a long-term transit contractor. Following the completion of a competitive Request For Proposal process, TOK was awarded a contract from RMWB for the provision of a full-service bus transit system for an initial 15 year term, plus a potential 5 year renewal (the “Transit Services Agreement”). TOK commenced the provision of transit services on July 1, 2013 in accordance with the terms of the Transit Services Agreement.

RMWB implemented a broad audit which involved a reconsideration of all of RMWB’s third party services contracts. Ultimately, this process led to a decision by RMWB to bring the provision of transit services in-house, which resulted in the termination of the Transit Services Agreement on 90 days notice to TOK. The RMWB’s decision was based exclusively on internal considerations and was not the result of any performance issues or shortfalls on the part of TOK.

TOK remains eligible to participate in any future opportunities to tender or participate in Requests for Proposals that may be initiated by RMWB for the provision of transit services.

TOK is proud to be involved in community efforts to help in the fight against COVID-19. With the help of our TOK Performance team we have partnered with York Region Transit to convert 4 YRT buses into mobile vaccine clinics to assist York Region Public Health with vaccine distribution.

To find out more information about vaccines or to find out if you’re eligible, visit york.ca/covid19vaccineinfo

TOK Group is pleased to announce that The Regional Municipality of York has awarded the contract for transit operations and maintenance of the West-North Transit Division to TOK Transit (a wholly owned subsidiary of the TOK Group) for a term of seven years commencing May 1, 2021 with an option for the Region to renew for an additional term of up to three years.

Under this contract, Tok Transit will operate a total of 66 conventional fixed route transit services, including Community Bus, School Specials, and GO Transit Train Shuttles for York Region’s west and north demographic areas. This includes the Towns of Georgina, East Gwillimbury, Newmarket, Aurora, and Whitchurch-Stouffville, the cities of Richmond Hill, Vaughan, and Markham and the Township of King. Tok will also provide connecting transit services to Brampton Transit, GO Transit and the Toronto Transit Commission. 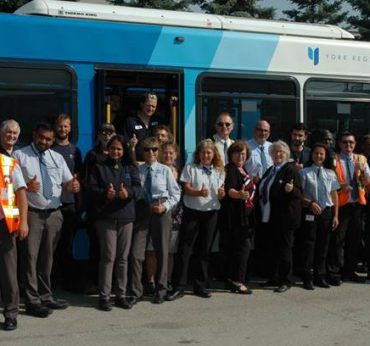